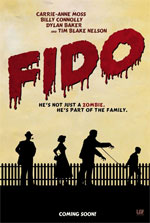 Their neighbors all have at least one, some even several. Only the Robinsons don’t have one, yet. Somewhen, the social pressure becomes too much for Helen Robinson (Carrie-Anne Moss) and she finally buys a Zombie for her family to help in the household.

Bill (Dylan Baker), her husband, is not very happy about this, because Zombies give him the creeps – although they are rendered perfectly harmless by the famous Zomcon collar. He also is worried about the financial strain, because he is saving up to give each member of his family a burial complete with head coffin.

The son, Timmy (K’Sun Ray), quickly makes friends with the new zombie and names him Fido (Billy Connolly). Regular venoms from Bill taken aside, everything seems to work well for the family – until Fido accidentally eats a neighbor…

I always like movies that bend the Good Old Zombie Genre into such absurd things like Fido in this case. 🙂

Is that blood on your zombie?

Bill, just because your father tried to eat you does that mean we all have to be unhappy?

Unfortunately, the movie repeatedly misses some speed. There is not really an intense climax.

Nevertheless, Fido is fun. Especially if you like zombie movies, of course. 🙂 People who had little contact to the genre may have their difficulties enjoying the movie.

I’ve only just heard of this movie, and I’m devastated that it’s not available in the UK.

Thanks for recomendation. Will watch the movie on DVD.