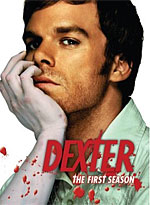 Dexter is a serial killer. And Dexter is working for the police. Not as a killer, of course, but as an expert for blood patterns. He knows blood like nobody else. In his spare time he continues hunting Bad People[tm] – but unlike during his official work, the hunt usually does not end with an arrest, but with a ritual murder.

From a moral point of view, this show is completely unacceptable. On the other hand, it is very entertaining. 🙂

The plot is usually told from Dexter’s point of view, commented by his spoken thoughts. This is the really fascinating part of this show – observing how Dexter, the psychopath, displays a completely normal live to the outside world while his thoughts describe his inner emptiness, need for blood and how he channels these uncontrollable urges into bloody acts which he can justify to himself.

The main plot is usually accompanied by episodes from his past. How he got adopted by a policeman. His first murder. Fragmental hints about what happened to his parents.

Like most current shows, Dexter employs a plotline which spans all episodes of a season. In the first season, this plotline is about another serial killer, the “Ice Truck Killer”, who murders prostitutes in series. Dexter is fascinated by his technique, how he creates bloodless, cleanly dismembered and partly wrapped corpses. The Ice Truck Killer seems to be equally fascinated by Dexter, because he leaves him messages (sometimes in the form of carefully arranged body parts).

It is really fascinating how Dexter develops over the episodes – and describes this process himself in his thoughts. Unfortunately, I can’t describe this in detail without giving too much away. From my point of view, the development of Dexter’s character is the most exciting part of this show.

Interestingly, Dexter is one of those characters whom one can’t help to like, despite him doing obviously Bad Things[tm]. It’s a similar phenomenon as with Ben Wade in “3:10 to Yuma”. On the one hand, I find that very intriguing, but on the other hand somewhat problematic. Serial killers are never good, even when they are hunting bad guys. I think this is more troublesome than “usual” violence in movies / shows.

All in all I think Dexter is worth seeing. A lot. But as already mentioned it is also kinda immoral. 🙂 Who does not want to be entertained by immoral fiction should better avoid Dexter. Everyone else: Have fun! 🙂

(This article is also available in German)