Our last short movie, Zeiträume (German only… sorry), was shot to large parts in a train. As you can imagine, one can choose easier locations to shoot a movie.

For those of you, who plan a similar endeavor (and everyone else interested), I want to describe what we did to get Zeiträume shot.

There are a few tricky problems when your location is a train. The obvious one is that you need a train and the permission to shoot in it. You also have to find a way to record the dialogs without noise and still have at least the illusion of a moving train in your final movie.

There is a lot of noise in a moving train. Modern trains like the German ICE produce relatively little noise by themselves, but it probably is still too much for a clean sound recording. Less modern trains present even more of a nightmare. If you don’t have a wagon exclusively for yourself, you additionally have the noise of other passengers.

If you want to record dialog, you need to split your shootings up. You produce every shot that contains dialog in an empty wagon which does not move and therefore provides a clean sound recording. Then you shoot the rest in a moving train and intercut them to create the illusion of the scene taking place in a moving train completely.

The moving train is much likely to shake the camera. Unless you find a way to fix the camera to the wagon, all your moving scenes will not be perfectly stable. In most cases, you also won’t have enough room to use a camera stabilizer like a steadycam.

Basically, this leaves you two options: Find a way to fixate the camera in the moving train, or shake it in the standing train.
We decided to go for the latter strategy. We didn’t use a tripod in the standing train and I deliberately didn’t hold the camera as steady as I could have. In the moving train, we also didn’t use a tripod, but I tried to hold the camera as steady as possible.

We also thought that a shaking tripod would result in an “artificial” shaking, which would not match the handheld camera shaking. That’s why we did not use a tripod in the moving train to get it more steady.

Our plan worked pretty well. Nobody noticed that the scenes were shot at two completely different locations. Even the very varying lighting in the moving train did not destroy the illusion.

The largest downside to this strategy was, that we were very limited in the choice of camera angels.

Larger productions can afford to rent a complete train or rebuild one in a studio. Being a no-budget production, this was not an option for us.

For non-commercial productions, it is relatively easy to get a filming permit. The national railway company in Germany lets you shoot in their trains for free – as long as you buy tickets for your crew. I guess similar arrangements can be made with most companies.

Still, this was too expensive for us. Tickets for a complete crew and for several days (2 complete days in our case) certainly belong not in the no-budget class. Additionally, it might be difficult to get the permit to film in a standing train (hell, we once even didn’t get permission to film on an empty Walmart parking lot in the night, because they said they would have to hire guards… *sigh*).

Fortunately, there are quite a few noncommercial railway clubs. Most of them restore historic trains and let them travel every once in a while. Those clubs are often very cooperative, probably because a movie in their train means free publicity (and because these are generally very nice people). We found several clubs who were willing to cooperate, and decided to choose the one who was geographically closest, called GES.

They allowed us to film in one of their historic trains, powered by a steam engine. Our movie did not play in the steam engine area. We decided not to explain this oddity at all in the movie. That added a little weird touch to the setting, but we liked that.

The GES let us film on one of their trips and we did not have to buy any tickets. The train was overfilled with families, so we had to take care that no one got into the picture. It was a bit tricky to get a clean recording of the train’s background noise without the noise of the passengers. If you have the chance to, record the “clean” sound when the train is first leaving the depot and before it reaches the first station to pick up passengers.

Every shot with dialog was produced at the depot. We could shoot in a wagon offside the others so there was very little trouble with construction noises. We only used natural light and several reflectors (mostly because we did not have any powerful lamps). 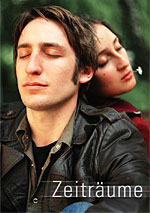 We were very satisfied with the results. We had no continuity problems and (almost) no one was confused by the contrast between the contemporary story and the historic train. If you can understand German, feel free to take a look at the results. 🙂

Nevertheless, I would not really recommend filming in a train. It generally means a lot of trouble and limitations, so if your story does not require a train, better avoid it.

There is also a German version of this article: “Dreharbeiten im Zug“