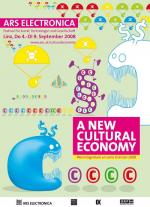 Last year, I was at the *Ars Electronica Festival* in Linz, Austria. Unfortunately, I was too busy with [beyond vision](http://www.kreativrauschen.com/projects/beyond-vision/) to post my impressions immediately, but now I’m going to make up for it. In the months that have passed, my memory of the event has faded a bit, but I’ll do my best to convey an adequate overview, with the help of tons of pictures.

All in all I was not as impressed by the festival in 2008 as I was in 2007. In part, this is because I visited the Ars Electronica Center exhebition for the first time in 2007. That exhibition is one of the greatest, but it did not change a lot from 2007 to 2008, so it was kinda “old news” for me this time.

By the way, visiting the *Ars Electronica Festival* on a saturday turned out not to be a problem. At first I was worried that the exhibitions would be overcrowded on the weekend, but it wasn’t much different than on the weekday the year before. The decision not to buy a day ticket was also right. I spent much less on single exhebition fees than a day ticket would have cost.

And now for the pictures… 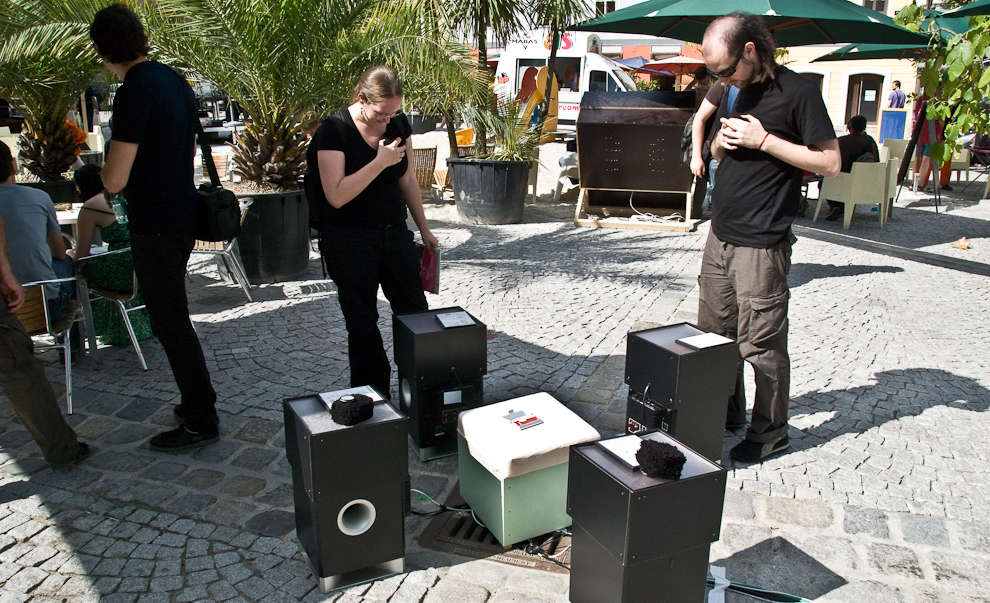 The most interesting work on the Pfarrplatz – in my humble opinion – was *Koudou*. One could hold a stethoscope-style sensor on one’s body and try to hear the heartbeat. The sound was heavily amplified and distorted so that there wasn’t much of a heartbeat left, but the bass-emphasized sound was pretty cool. 🙂

The exhibition *CyberArts* in the OK turned out to be one of the highlights of this year’s *Ars Electronica Festival*. 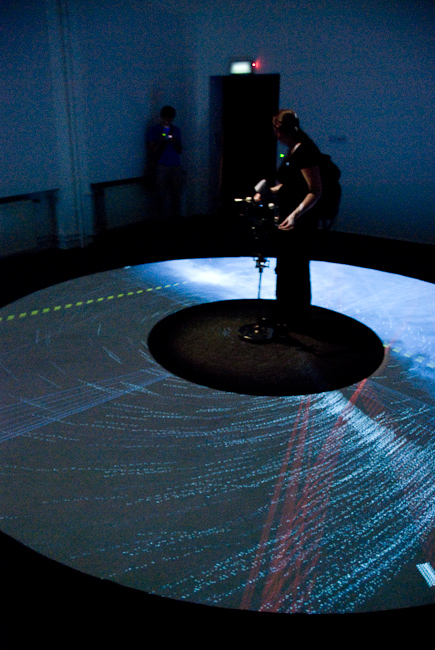 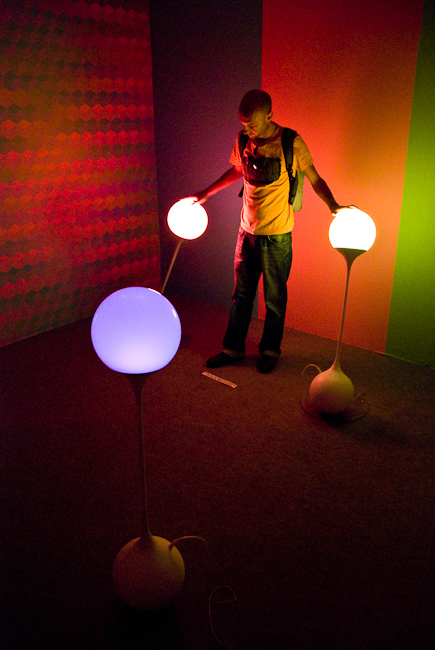 Left: a plaything for the great observers at rest by Norimichi Hirakawa. Right: Optical Tone by Mutoh Tsutomu.

Some works were kinda pointless, but beautiful, like the above pictured *a plaything for the great observers at rest* and *Optical Tone*. With [a plaything for the great observers at rest](http://counteraktiv.com/wrk/ap) one could overlap different world views – in the end just beautiful light effects in an unusual projection and a wacky input device which supposedly resembled a conceptual model of sun and earth. [Optical Tone](http://mutoh.imrf.or.jp/opticaltone) consisted of funny colourful lights which could be pushed around to make them change colour. 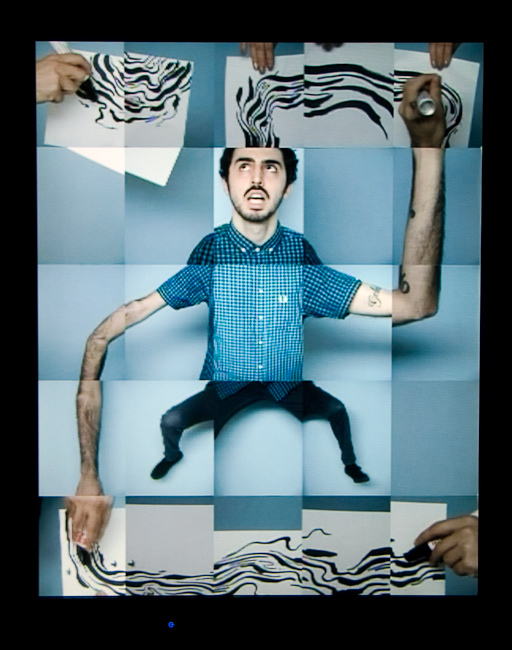 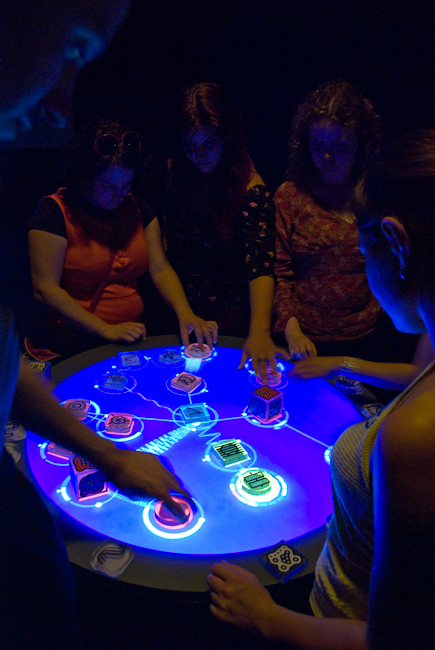 More permanently fascinating were projects like [Reactable](http://reactable.iua.upf.edu). *Reactable* is a sort of electronic music instrument, which gathered some fame during a tour with Björk.

Also very cool was [The Replenishing Body](http://www.showstudio.com/project/thereplenishingbody) where visitors could record short video sequences of themselves which then would be assembled to one large mosaic video. This lead to some really great and wacky compositions. Too bad that I only have a photo… 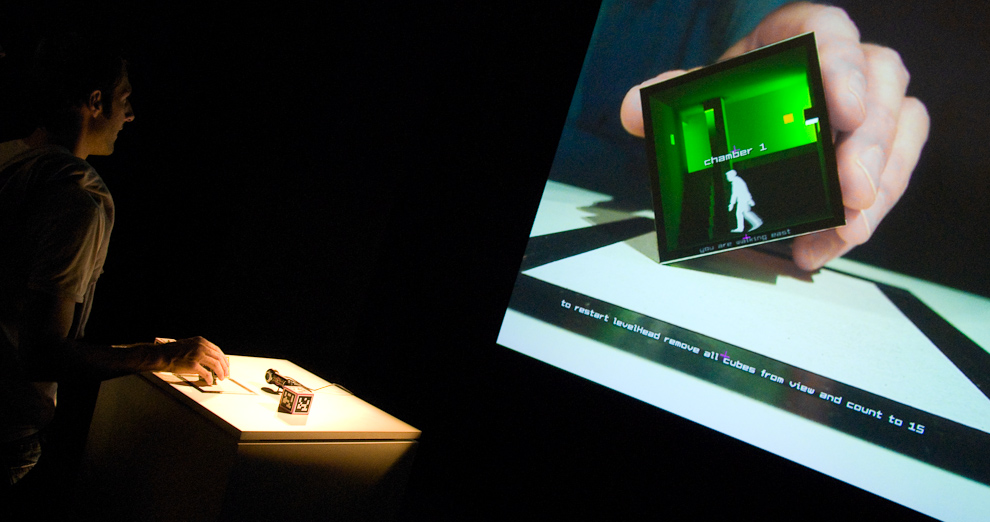 [levelHead](http://julianoliver.com/levelhead) became one of my favorites of *Ars Electronica 2008*. In this game, one has to lead a character through a maze. The little hero is controlled with a cube. This cube is filmed with a camera and the image projected onto a screen. In the projection, the formerly solid cube is altered to contain the maze including character. The character always walks “downwards”, so one has to tilt the cube to make the character tumble in the right direction. Lots of fun. 🙂

Just like the year before, there was again a campus exhibition. This time in collaboration with the university of Tokyo which included many student projects. 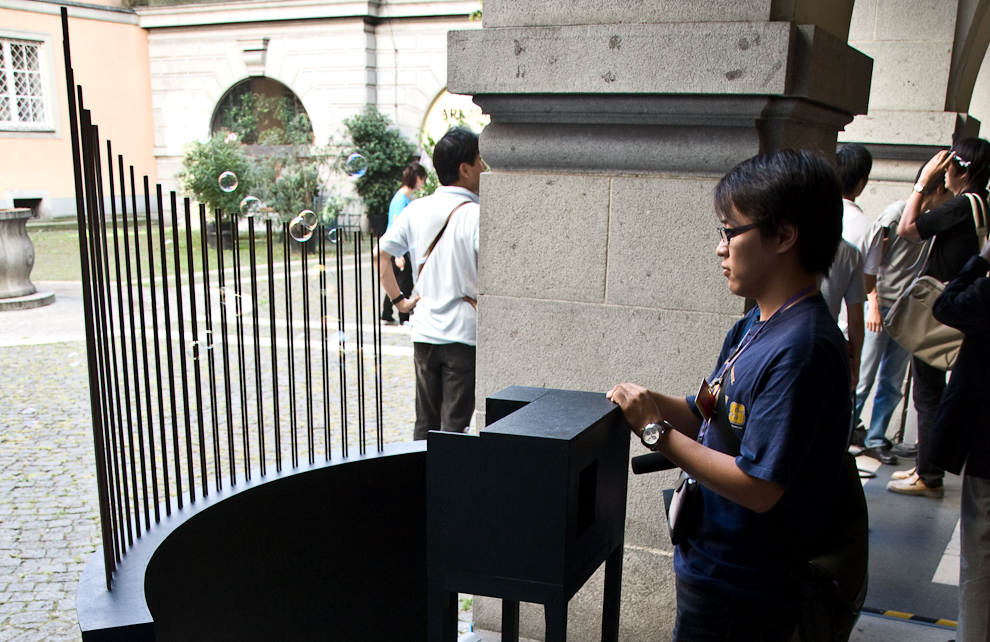 *ephemeral melody*, as seen above, was borderline kitschy, but still very beautiful. One could use a small crank to create soap bubbles. When bubbles collided with metal rods which were placed in front of the bubble-output, a sound rang. Kinda lika a soap bubble piano. 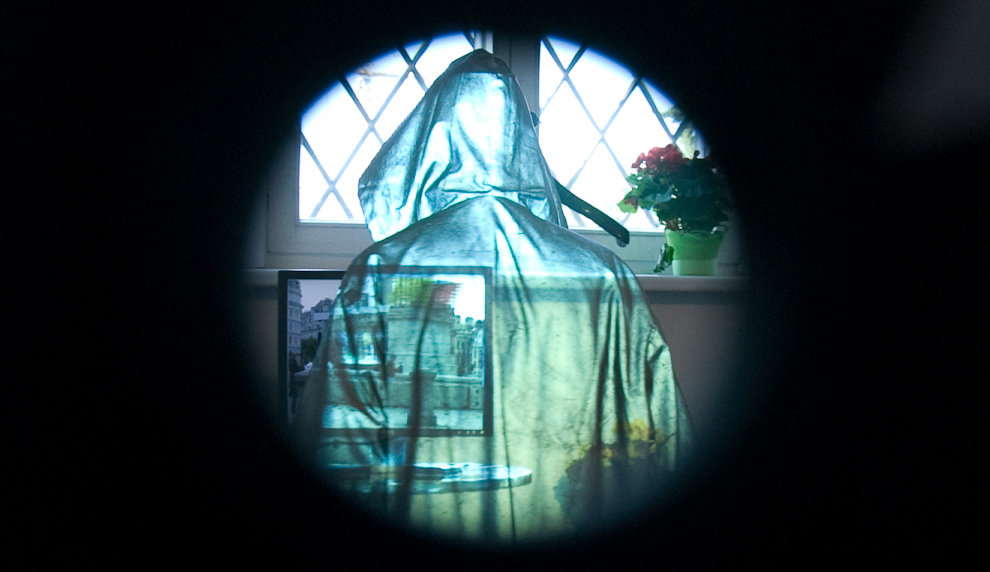 Also drolly was the installation *Optical Camouflage*. A person with a grey coat moved up and down in front of fixed binoculars. When looking through the binoculars, one saw the above picture. The background glimmered through the person (or, more correctly: it was projected onto him – the coat was of a material which reflected light exactly back in the direction that it came from and there was a projector built into the binoculars which projected the background right from the oberserver’s point of view). 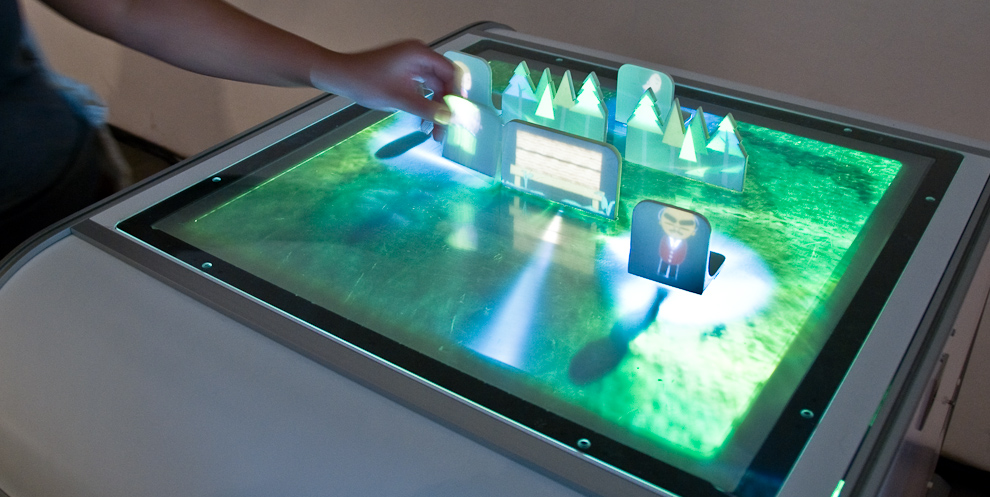 Tablescape Plus by Yasuaki Kakehi, Takeshi Naemura and Mitsunori Matsushita

On *Tablescape Plus*, one could push little projection screens around. A character or object was projected onto each of those. When the screens came into close proximity, the characters began interacting with each other. For example – and if I remember correctly – the male figure began arguing with the female one as soon as they were moved close to each other.

*TORSO* was an experiment about telepresence. One could put on a – slightly bulky – helmet and then saw through the “eyes” of a robot head next beside oneself. The movements of the helmet were tracked and the robot head copied the movement exactly to make the illusion of seeing through its eyes perfect. To demonstrate the realism of the effect, the supervising artist sometimes thrust a softball onto the roboter head to shock the visitor – for whom the impression was as like the ball was thrown onto himself. 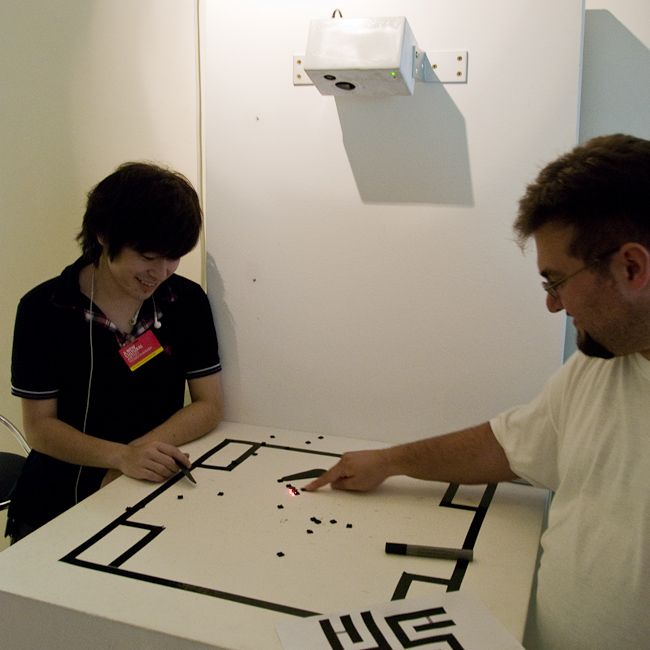 Erm… I better had written title and artist down for this one….

In the topmost floor there was a small setup witch projected a small laser-point onto a desk. The point always moves along any black edges on the surface. Visitors could add or remove such edges and thereby play with this living point.

Unfortunately I missed to write down title and artist and also can’t find them in the official Ars Electronica Festival guide. If any of you know any details: Please leave a comment below. 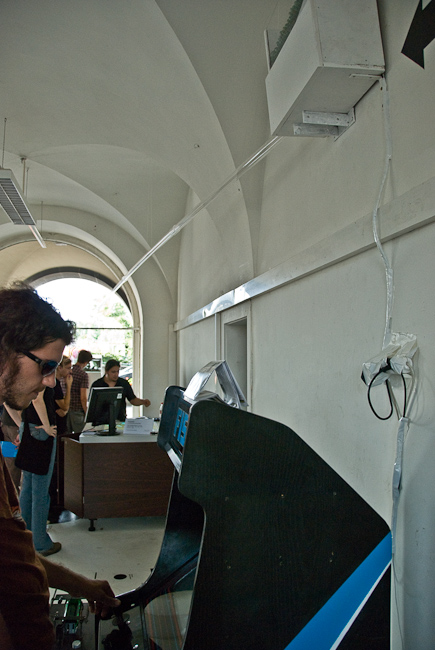 *Fishy* (in the *campus | Interface Cultures* exhibit) was a weird combination of Space Invaders and an aquarium. One could play Space Invaders on a game machine. When a certain level was reached – which took Forever – a marble dropped from a box above, rolled through a glass pipe across the room and finally dropped into an aquarium at the other end of the room. The idea seemed to be to play the game until there was no water left in the aquarium. Upon my visit there already was a number of marbles in the aquarium, but I didn’t see anyone reaching the necessary level to drop anotherone. I seriously doubt that the aquarium was filled to any notable degree during the whole *Ars Electronica 2008*. 🙂

So much for the artworks. Now for a few photos of the *Lentos Kunstmuseum*, a museum whose facade impressed me. Also the inside view of a beautiful church in Linz: 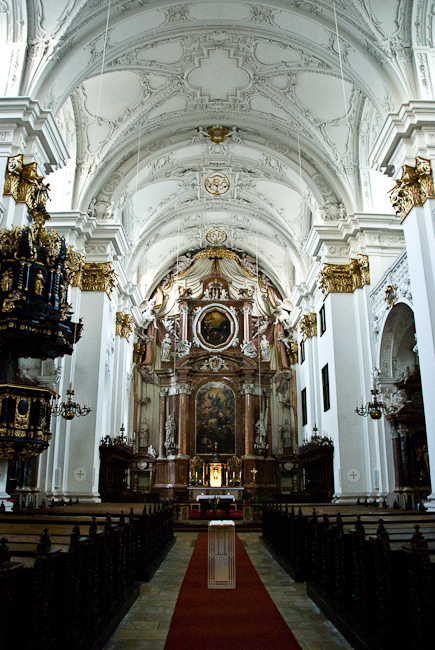 Lentos Kunstmuseum and a church in Linz

At the end of the day, we attended an event at the waterside of the river Donau. The event was titled *Visualisierte Linzer Klangwolke* which roughly translates to Visualized Sound Cloud of Linz (the German version sounds much cooler ^_^). That was a pretty large event, consisting of light effects, projections and sound – basically a sexed up audio play.

The light effects were impressive. On both sides of the river were large spotlights which swung light beams through the night sky.

Most whacky was the large floating platform on which large projection screens and more spotlights were placed. During the performance, this platform was pulled back and forth through the river – cool thing. 🙂
The projections themselves were less impressive. They were not only projected onto the platform but also onto several buildings – which is in itself a nice concept. Unfortunately, they appeared rather cheap. (Not that I was producing the elaborate [beyond vision](http://www.kreativrauschen.com/projects/beyond-vision/) project at that time, so my demands might have been heightened)

Most ansatisfactory, though, was the story. Too much time has passed to be still able to offer a sound criticism, but in my humble opinion, story and text were often quite awful.

On the other hand, the use of live performances was quite cool. At one point, for example, several performers climbed high posts, unrolled large papers and sprayed symbols onto them.

For the finale, there also were fireworks. That always makes me happy. 🙂 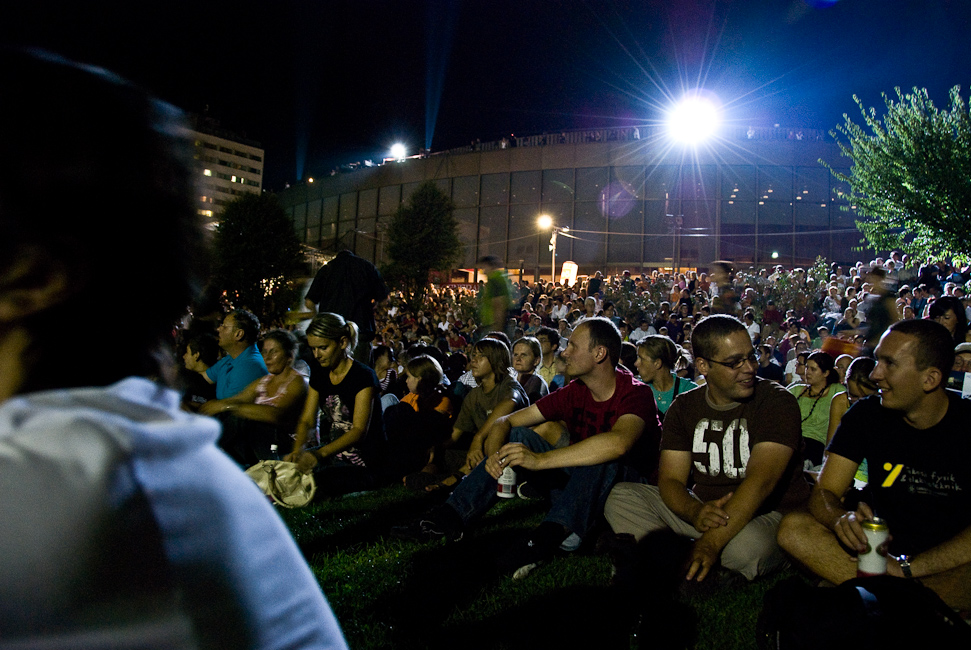 Large audience – this is only a small part of the whole mass of visitors. Oh dear, that was one crowded event! 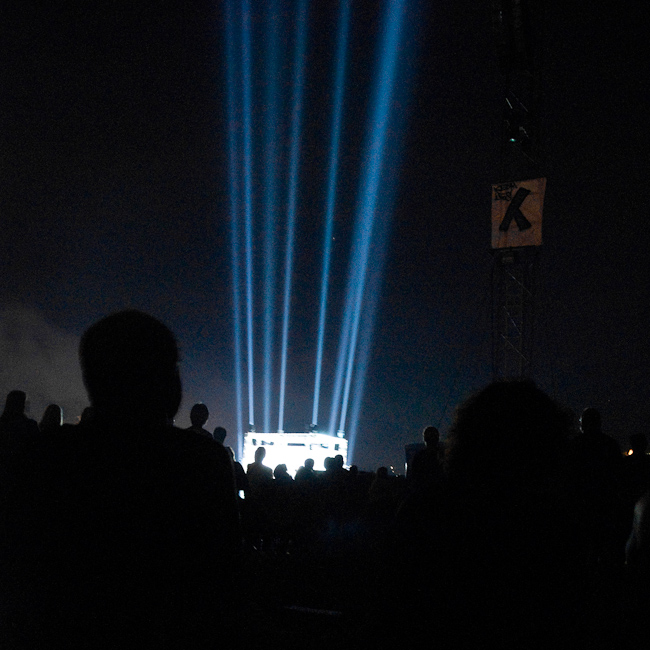 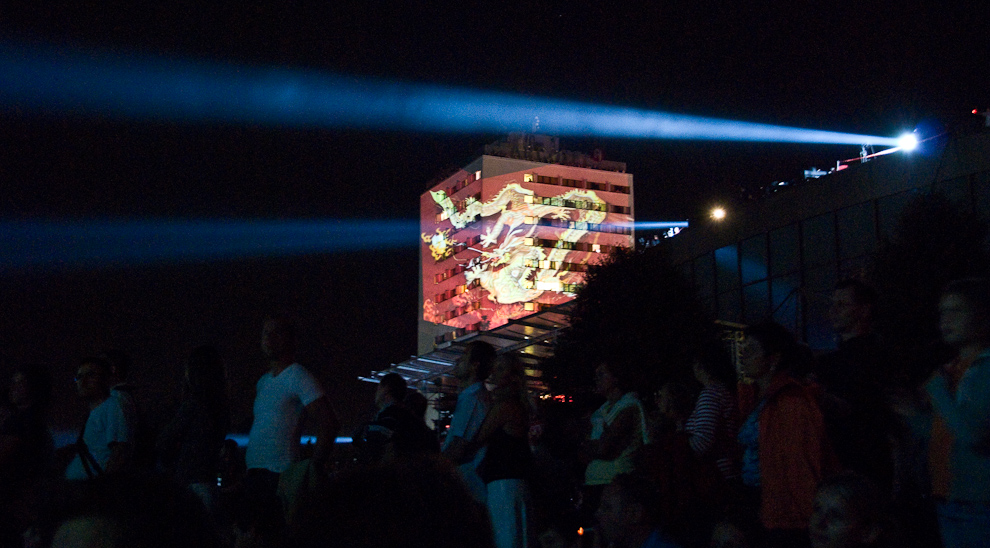 Two of several large spotlights and a building as projection screen. 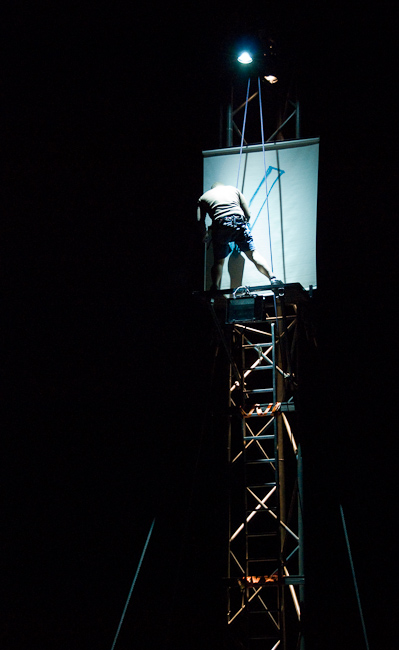 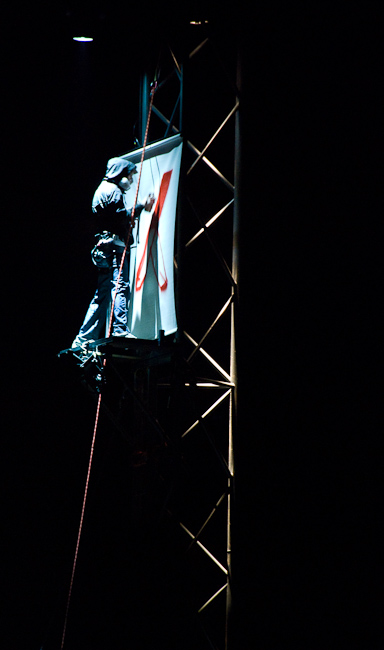 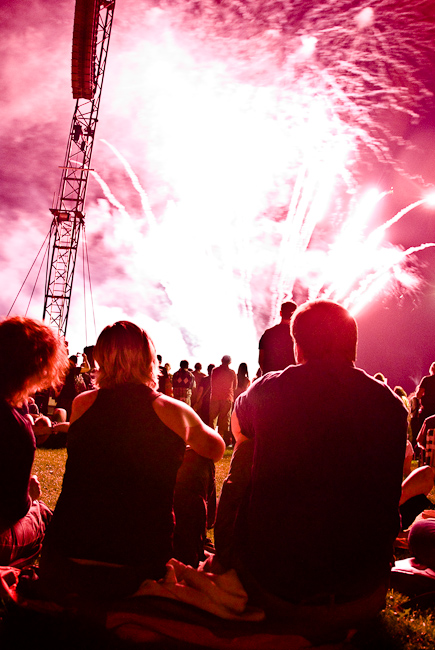 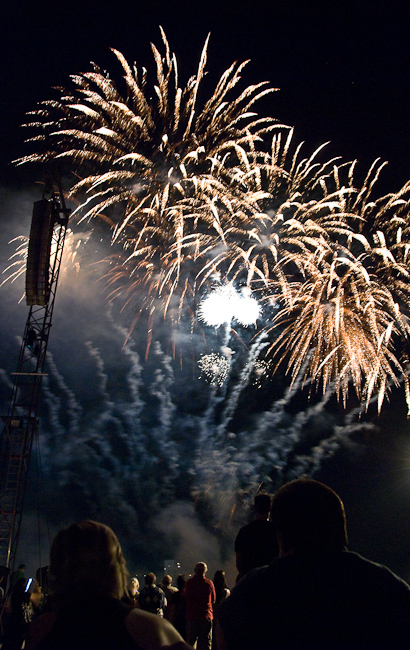 ## Links to other resources about Ars Electronica 2008

I collected a few links to more *Ars Electronica 2008 resources*. Feel free to add your own in the comment section below.

I was here its really amazing. Thanks for providing these photos.

Hello!
Very Interesting post! Thank you for such interesting resource!
PS: Sorry for my bad english, I’v just started to learn this language 😉
See you!
Your, Raiul Baztepo