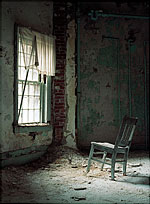 I have rarely seen such beautifully crumbled rooms. The color is peeling in large patterns from the walls. Debris resides in rooms and corridors. Every now and then there are sad artefacts of the former life – wheelchairs, cekks, crutches, stuff that looks like blood samples…