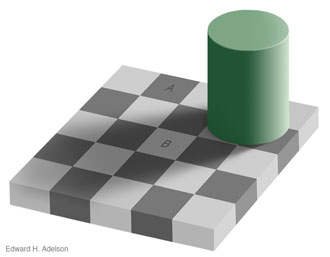 Most of you probably already know the optical illusion pictured above. The fields marked A and B look different, but in reality the two colors are identical. At the end of the article is an proving picture for the unbelievers. 🙂 Knowing this illusion, do you also know how it works?

People don’t judge the brightness of surfaces in absolute terms. A white surface in the shadows can be technically darker than a black surface in the sun. The human perception is designed to recognize “white” surfaces even when they are in the shades. So it uses some tricks.

For one, local contrast is assigned an emphasized meaning. If a surface is surrounded by darker surfaces then it is most likely a bright surface. No matter whether it is in the light or shadow.

Human perception also tends to ignore smooth transitions in brightness. Such gradients are usually created by shadows and our perceptive system tries to compensate for shadows as good as possible to recognize the “real” color. The effect is strengthened because the object which is casting the shadow is also visible in the picture. The hard edges on the fields of the chessboard also suggest monochromatic surfaces.

To cite the author of this illusion, Edward Adelson:

As with many so-called illusions, this effect really demonstrates the success rather than the failure of the visual system. The visual system is not very good at being a physical light meter, but that is not its purpose. The important task is to break the image information down into meaningful components, and thereby perceive the nature of the objects in view.

Some time ago I presented another optical illusion:

The Colourful Black and White Image