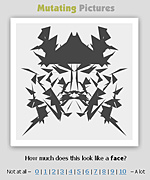 Mutating Pictures started with 1000 pictures, consisting of randomly spread triangles of different sizes. Every visitor can rate how much the picture resembles a face. The system then generates “offspring” of the highest rated pictures. The goal is to get evolutionary created pictures of faces somewhen.

The experiment started in October 2007. It developed quite well until there was almost no image left which did not resemble a face (although most faces seemed like those of samurais *g*). It appears to me that the average quality has deteriorated somehow since then, though.

The project has also been extended and now tries to breed pictures of bodies and animals as well.

To me, Mutating Pictures looks like a great example to demonstrate how random change and selection can evolve into higher structures over time. Very fascinating. It also caused an entertaining, although slightly evil, comment from a forum user:

Mutating Pictures does not seem to be the only project of its kind. picbreeder also tries to breed images. It is not limited to three “targets”. The community can try to create whatever they like. At first view, I saw butterflies, cars and skulls. Everyone can start her own project.

(via Kreativrauschen.de via Boing Boing)