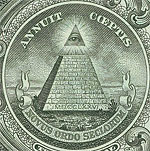 A blogger created a beautiful list of 27 totally absurd conspiracy theories. Obviously, these theories are pointless, but quite fun to read. 🙂

These are my favorites:

The original article also contains some information about the origins of the theories.

(via Boing Boing via Kreativrauschen.de)

One reply on “27 Crazy Conspiracy Theories”

Osama Bin Laden shaved, and got blond tips. He is now who we know as Ryan Seacrest. The resemblance is uncanny. Ryan Seacrest is short, like many Middle Eastern men, and has beady eyes.

The reason why we took so long to find King Tutankhamen’s tomb is because giant aliens buried it.

Abraham Lincoln was hiding a midget plantation in his hat. They plowed his cornrows.

Hurricane Katrina never happened, George W flooded New Orleans to have a boat race with Dick and Condy,and things got out of hand…