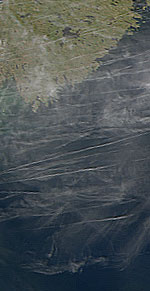 The whole world is worried about Global Warming and the greenhouse gases responsible for it like CO2. Yet, another phenomenon is hardly known: Global Dimming.

Some scientists noticed that over the course of the last decades, less and less sun light reached the ground of the earth. The cause seems to be air pollution, caused by humanity itself.

The most graphic example of this are contrails which aircrafts draw in the sky. Each contrails stops a little sunlight from reaching the earth. And there are lots of contrails. Contrails have been suspected to have an effect on climate for some time, but this effects could not be directly observed until the days after 9/11. For several days after the attacks, almost all air traffic over the united states was suspended – and the contrails were gone.

The difference between daytime and nighttime temperatures rose by about one degree Celsius on the three days after the attack. This has to be ascribed to higher temperatures during the day, said Dr. Travis. Before and after this time without air traffic, meteorologists recorded completely normal values.
(wissenschaft.de 2002, translated by me)

Not only contrails are the cause of Global Dimming. Other dirt particles in the air stop sunlight and they have a much more dramatic effect on clouds. Fine particles change the structure of clouds, causing them to reflect more light back into space. Particles also facilitate cloud buildup in general.

Another scientist, Beate Liepert, estimated that the insolation declined from 1961 to 1990 by about 4%. In some especially affected regions, it even declined by 10%.

So the world becomes colder… but it doesn’t. Despite the decreased insolation there does not seem to be a decline in temperatures. Scientists suspect, that Global Warming is masking Global Dimming.

This would be quite a problem, because this balance of pollutions could soon tilt. Currently, humanity is reducing its particle output (e.g. by use of filters or catalyzers) faster than its production of climate gases. Global Dimming could decrease while Global Warming still increases… and is even accelerated by the diminishing cooling of Global Dimming.

We can’t continue polluting the air with particles either. For one, particle pollution is suboptimal for human health. Additionally, Global Dimming has other dangerous effects. One example is the disastrous famine in Ethiopia which killed thousands of people and is suspected to be one consequence of Global Dimming.

So basically, we’re stuck with environment protection as the only solution. 🙂

Too much text? Go watch the BBC documentary: Global Dimming

The British television station BBC produced a very nice documentary about this topic with the simple title “Global Dimming”. The documentary is available on Google Video, but I am not sure if this is intended by the BBC, so I refrain from a link.

Definitely legal is the full transcript of the documentary.