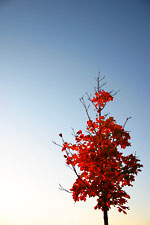 The public discussion about the change of climate is quite active. Usually, the central question is how we can reduce the CO2 output. Another question is mentioned rather seldomly: Can’t already emitted CO2 just be stored away so that it can’t do any harm to the climate?

Plants absorb CO2 and bind it as carbon. At the moment, we humans are happily disposing plants in the form of forest. The natural capacities to bind CO2 are constantly deteriorating. Much of the cleared forest is burned, setting free the CO2 it once stored.

Forestation can turn CO2 back into wood. More wood = less CO2, that’s the simple formula. Even if it is – for economic reasons – not possible to let the forest survive, the co2 can be kept in the wood. One only needs to make sure that the wood isn’t burned, but used for construction of things like furniture or houses. That way your wooden interiors become a climate friendly environment. (yet another thing you can brag about – cool, isn’t it?)

Forestation isn’t the all saving wonder weapon against climate change, though. In some cases it can even be negative – although those are more of an exception.

Less natural is the strategy to store CO2 underground. The CO2 just gets pumped into stone layers deep under the surface, so that it can’t escape anymore. This technology is usually considered, when power plants are equipped with special filters which can separate CO2 upon creation from the remaining emissions.

Mostly, this form of storage is only considered a temporary solution, until the CO2 emissions can be reduced in the first place. In the long term and at a large scale, the underground CO2 storage does not seem to be feasible.

Dumping iron into the ocean

A little more adventurous seems the method of iron fertilization. This concept plans to stimulate growth of phytoplankton, which binds CO2, by fertilizing oceans – with iron.

If there is enough plankton, more of it will escape the maritime food chain and sink to the ground. Once at the ground of the ocean, it stays there – because it doesn’t get eaten by the upper life forms – and the CO2 is permanently stored at the bottom of the ocean. There already have been several experiments which demonstrated this effect in small scale.

Still, iron fertilization is heavily controversial. A gigantic intervention into the maritime ecosystem would be required to store enough CO2 to influence the climate change. No one can be sure which effects such a massive operation would have. Proponents argue that the procedure should be save at least until the plankton population doesn’t exceed the levels of 1980. Then, it would rather be a compensation of damages which humans have done to the ecosystem.